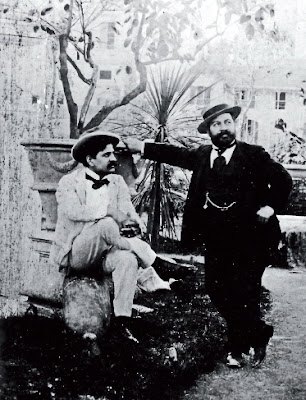 Vincenzo Galdi (left) is shown here with Italian sculptor Rutelli.  Galdi is supposed to have take this photo of the two of them with a timer.  He was both a model and a disciple of Gugielmo von Pluschow, a notorious photographer who moved from Germany to Italy to ply his trade . . . and the young men of Sicily.  Many observers say the two were also lovers, but not everyone agrees.  (If you want to see some of Pluschow's nudes of Galdi, click on the von Pluschow label at right.)  Galdi eventually married a woman and moved to Rome where he had a successful career photographing male and female nudes as well as standard portraits.  Galdi and Rutelli collaborated on a fountain that scandalized local society with its graphic portrayals of nymphs and satyrs.  The city council put a fence around the fountain to obscure its view, but the local art students rioted and removed the fence so everyone could see.
Posted by Vintage Muscle Men at 2:30 AM