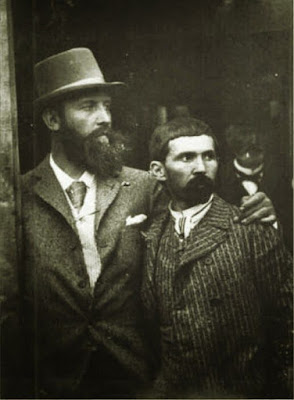 Gustave Courtois (left) and Pascal Dagnan Bouveret met in a Paris art academy and became successful artists of the Academic style.  They also maintained a studio together for many
years and were widely assumed by the sophisticated Parisians to have been lovers.  In the last
months of my old tumblr blog, I featured a series of nudes by Bouveret.  Now it is Courtois' turn,
but unfortunately he only did seminude paintings of men.  They are still worth a look.
(For those of you who missed the Bouveret nudes, I will rerun them fairly soon.)

Email ThisBlogThis!Share to TwitterShare to FacebookShare to Pinterest
Labels: Courtois and Bouveret