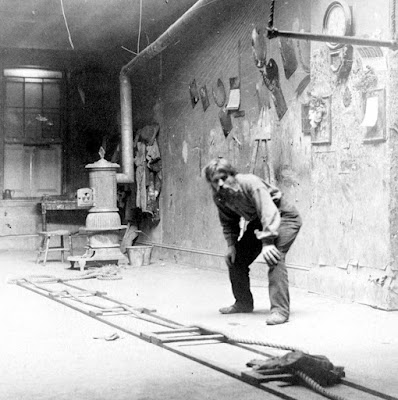 This is Franklin Schenck, a student at Eakins' private Art Students' League of Philadelphia who paid his tuition by modeling and being the studio janitor.  Schenck was homosexual and eventually owned a small farm on Long Island where he painted and raised vegetables and chickens.  Some gay friendly writers from New York helped him stage an exhibit of his work at a Manhattan gallery in the early 1920's.  Eakins' widow purchased a number of Schenck's works and donated them to a museum,]
but I have unfortunately been unable to find any on line copies of them.  Eakins is believed to have taken this photograph around 1887.  Franklin was a handsome man and a good model.
Posted by Vintage Muscle Men at 2:30 AM