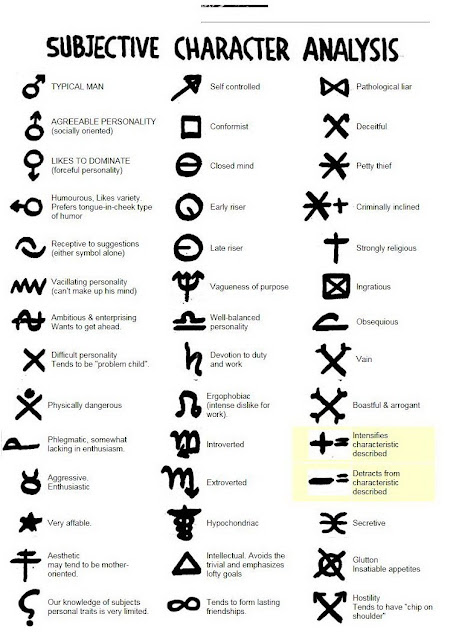 You've all heard of the Da Vinci Codes, and some of you have heard about the Bob Mizer Squiggle Codes.  Those are the cryptic symbolic notes that Bob Mizer of AMG placed in some of his magazine pages to describe certain proclivities of the models.  In a later series, we'll actually look at some of the hilarious messages he printed about them in the clear, such as "If you let him in your house, make him keep his hands in his pockets or your jewelry and loose change will be gone."
Edited to add:  During one of Mizer's confrontations with the legal authorities, they used those squiggles as "evidence" that he was running a mail order male prostitution ring.  They were supposed to let the "customers" know what acts the men would do.  While some of the men in the pictures were indeed hustlers, and some of the squiggles did indeed refer (usually vaguely) to sex acts, Mizer was not a pimp.
Posted by Vintage Muscle Men at 2:30 AM

Email ThisBlogThis!Share to TwitterShare to FacebookShare to Pinterest
Labels: AMG