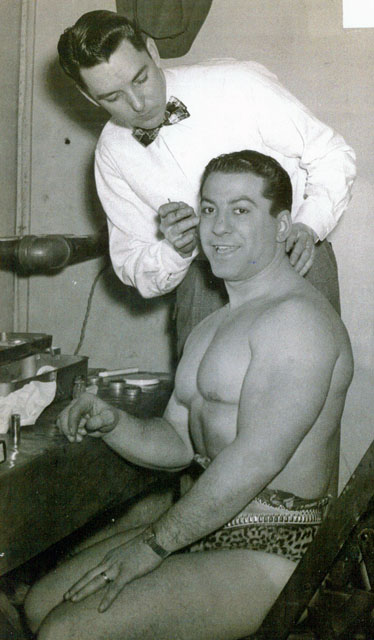 Dan Lurie's competitive bodybuilding career was waning when the TV age dawned.  So his next move was to land a spot on a popular children's variety show called Sealtest's Big Top.  He was billed as "Sealtest Dan, the Muscle Man" from 1950 to 1957.  Also appearing on the show was a clown named Ed who was later better known as Johnny Carson's sidekick, Ed McMahon.  Here we see Dan getting his makeup applied.  I wonder if this lucky makeup guy got to do his whole body?
Posted by Vintage Muscle Men at 2:30 AM

Email ThisBlogThis!Share to TwitterShare to FacebookShare to Pinterest
Labels: Dan Lurie, Whatever happened to . . .