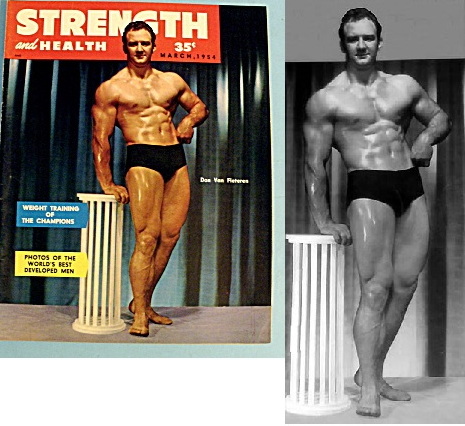 Don van Fleteren was a Detroit firefighter and Mr. Michigan for three years running in the early 1950s.
He was known to have been photographed by both Douglas of Detroit and Cliff Oettinger, but I haven't been able to find any nudes by either.  The two images above are the same photo of course, but I wonder if the color was added after the fact to the 1950 magazine cover.  FWIW, I think they are by Doug Juleff because he used the same slotted column in several other photos.  And that leaves me wondering if some nudes of this handsome man were destroyed by the Detroit Police.
Posted by Vintage Muscle Men at 2:30 AM

Email ThisBlogThis!Share to TwitterShare to FacebookShare to Pinterest
Labels: Column, Douglas of Detroit