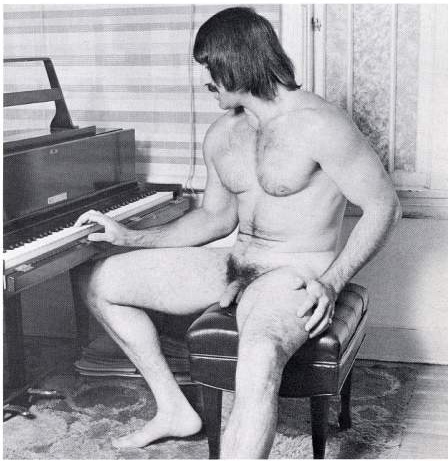 When I first came out in the 1970's in Austin, Texas, there was a circle of older gays who knew
the ropes and had code words and phrases for all sorts of situations.  One of those was the phrase
"Are you musical?" to which an affirmative response indicated one was gay.  If a new guy came
into a mixed setting, someone would always ask, "Is he musical?"  This predictably led to some misunderstandings such as when a handsome straight trombone player from Oklahoma City
answered "yes" at a dinner party and had to fight off advances from half a dozen middle aged
and older queens.  Anyway, today we go musical, starting with a hunk at a piano who looks
like he doesn't know a thing about music, but might be "musical."
Posted by Vintage Muscle Men at 2:30 AM

Email ThisBlogThis!Share to TwitterShare to FacebookShare to Pinterest
Labels: Musical