It's all Greek to me, Part 1 - The photography of Nelly's 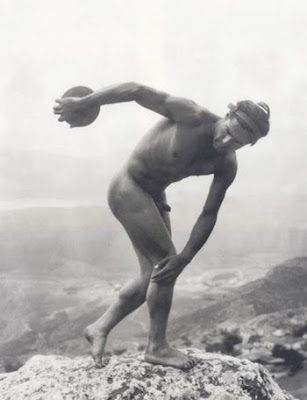 Our Friday double feature is all Greek, starting with the photographic work of Elli
Sougioultzoglou-Seraidari (1899-1998), aka Nelly's.  Nelly's (she put the apostrophe
in there even when not in the possessive mode) was born into a Greek family that
was expelled from Turkey in the early 1920s.  That made her an ardent Greek Nationalist
for a time, but she moved to New York from 1939 to 1966 when she returned to Greece.
Her best known photos were done 1921-1939, and her commercial work in the USA garners
little interest.  We start the series with a classic athlete on a mountaintop.  I think I showed
him in a different post about a month ago.
Posted by Vintage Muscle Men at 2:30 AM