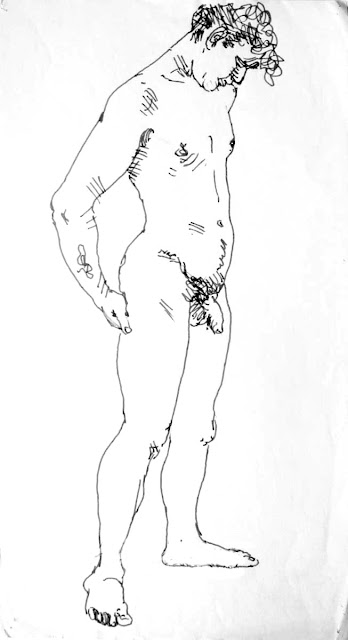 Peter Samuelson (1912-1996) apparently never intended to be a professional artist, having come from a financially comfortable family which owned some holiday properties in the Devon town of Torquay.  He attended Eton followed by a stint at art school in Paris.  He had a brief marriage to a Dutch woman before returning to Torquay where he helped his mother run a genteel boarding house where a lot of young men liked to stay.  He started painting (and eventually drawing) the guests as well as a number of local tradesmen, but he never showed or sold his work until friends staged some gallery shows in the 1980s.  Today we will be interested in his drawings as he apparently didn't paint nudes.
Posted by Vintage Muscle Men at 2:30 AM

Email ThisBlogThis!Share to TwitterShare to FacebookShare to Pinterest
Labels: art