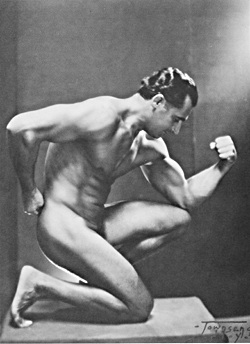 Born Angelo Siciliano in Italy in 1892, Charles Atlas was one of the most iconic proponents of physical training of the 20th Century.  His system of bodybuilding was advertised in comic books and just about anywhere else there might be an inkling of interest.  Although he never became fabulously wealthy, he did very well and bought his family a beach house in a nice part of Long Island.  He was not afraid to use the word "beauty" in reference to males, and I think that he was well entitled to do so.  This excellent photo is by Edwin Townsend, probably from the 1930s.  Today is Charles Atlas Day.
Posted by Vintage Muscle Men at 2:30 AM