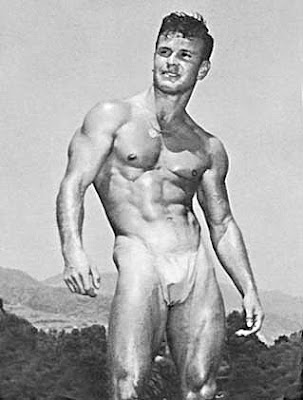 Bob Delmonteque was one of several models and bodybuilders who ended up behind the camera.  While he began taking photos while still in Michigan, most of his work was done in California, and he seems to have given it up when his training and gym business took off.  Too bad, that.  Although he did take some frontal nudes, having seen what happened to Doug Juleff in Detroit, he kept most of his photographic work on the mild side.  Today we look at five of those.  This is Don Reyes.
Posted by Vintage Muscle Men at 2:30 AM