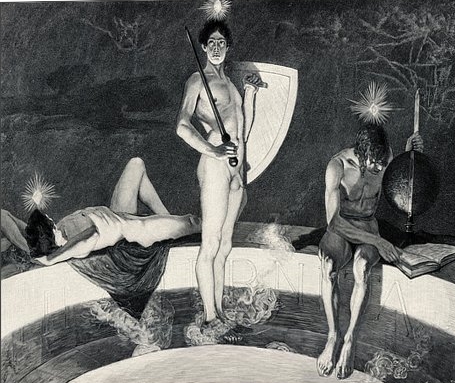 This is "The Geniuses of History" and is interesting on a couple of levels.  First, Schneider died in 1927, and I have to wonder if the symbolism of the light bulbs going on over their heads is something he came up with on his own.  I'm used to seeing it in mid-20th Century cartoons.  Second, this is an example of Schneider's tendency to leave the pubic hair out of his frontal nudes despite the fact that he sometimes ventured into almost hyper masculinity.  Makes no sense.  Even the Greeks and Romans left a little crotch fur on their art works.
Posted by Vintage Muscle Men at 2:30 AM