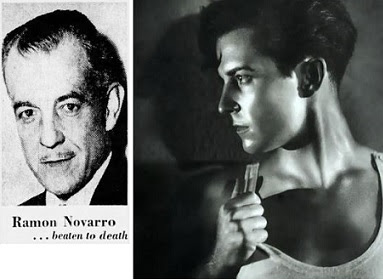 Paul Ferguson was joined by his younger brother Tommy came in Los Angeles in 1968, and the two turned to prostitution, sometimes through a "massage" callout agency that silent movie star Ramon Novarro used.  Another hustler at the agency told Paul that Mr. Novarro kept at least $5000 in cash in the house and handed over his phone number.  A call was made, and a threesome was set up.  The victim even ordered the brothers' favorite brand of cigarettes for the occasion.  The two demanded money, and proceeded to beat, torture, and eventually strangle Mr. Novarro when none was produced.  Interestingly, Paul was married for the third time at 22, and Tom was involved with a woman whose testimony would help convict the pair.  The police traced the murder to the Fergusons because Tommy had called an old girlfriend in Illinois for 48 minutes while Paul was beating Ramon.  Not bright.
Posted by Vintage Muscle Men at 2:30 AM