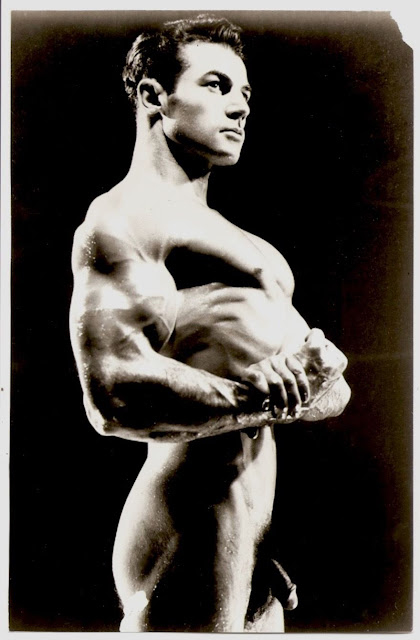 I recently realized that it's been too long since I did a series honoring Doug Juleff, aka Douglas of Detroit.  Victim of a 1958 raid by the Detroit Police aided by his own father, Mr. Juleff was jailed and much of his portfolio destroyed.  All that remained were the pictures already in circulation and a small group that he had moved to a friend's home shortly before the raid.  A very talented man, he never went back to physique photography, even after liberalization.  Thanks to collectors who have shared their images, we do have a sizable body of work, but are left wondering what was lost forever.  We start the show with this dramatically lighted photo of Bill Cooper.
Posted by Vintage Muscle Men at 2:30 AM

Email ThisBlogThis!Share to TwitterShare to FacebookShare to Pinterest
Labels: Douglas of Detroit, Lighting