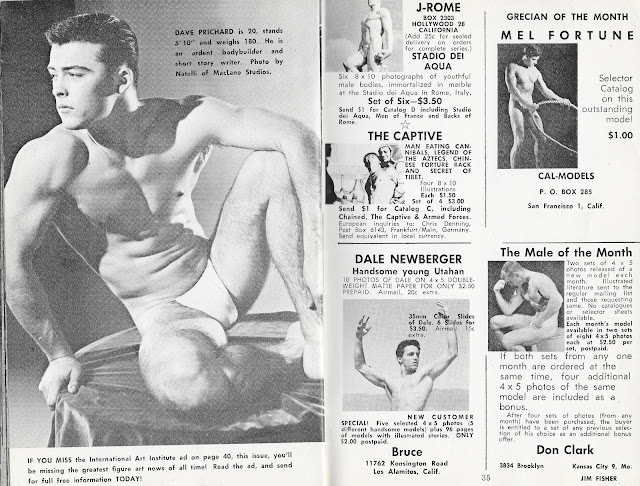 Dave Prichard looks good in his photo by Natalli of MacLane Studios, whoever they were,
but it's the ads on the facing page that are actually interesting here.  J-Rome was selling photos
of Italian statues that may have actually had penises on them.  (As genuine art, they were often
given a pass by the postal inspectors.)  In the same ad we have "man eating cannibals" and a
torture rack.  I bet that one sold well!  Bruce is selling photos of yet another guy from Utah,
Dale Newberger this time.  And Cal-Models is featuring a single model named Mel Fortune
whom most of us would really like to get to know better. A catalog was just a dollar.
Posted by Vintage Muscle Men at 2:30 AM

Email ThisBlogThis!Share to TwitterShare to FacebookShare to Pinterest
Labels: Bruce of LA, The Tim T. Collection