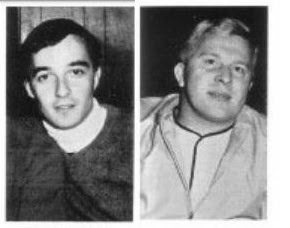 Conrad Germaine (left) had just been discharged from the Air Force in 1963 and stopped over in Minneapolis on the way to come out as gay in New York.  On that stopover he met Lloyd Spinar in a gay bar, fell in love with him, and started a business called DSI.  The two of them immediately set out to challenge remaining restrictions on male nude photograph distribution in the wake of Chuck Renslow's (Kris Studio) victory in Chicago.  DSI started out with "Butch" magazine and branched out, as you will see in today's series.  I have found no less than eight magazines, two gay guides, and a whole series of retail catalogs that they distributed.  They eventually won a landmark legal case of their own in 1967, using the profits from their business to pay for it.

Email ThisBlogThis!Share to TwitterShare to FacebookShare to Pinterest
Labels: DSI