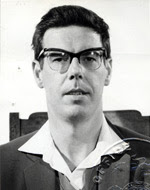 John Paignton Barrington (1920-1991) was an English photographer of male nudes whose career began in 1938 as a first year art student.  After World War II, he ran afoul of the law and was jailed at various times for tax evasion, soliciting sex in toilets, and sending obscene material through the mail.  Barrington's most productive and successful years were the 50's and 60's, but he failed to adapt to the wide open style of nude photography that emerged in the 70's.  He was known for the quality of his models, but not for the technical qualities of his photos.  Married for 35 years with a daughter, he admitted to having sex with many of his models the whole time, but denied being a homosexual.
So today is Barrington Day for a Wednesday double feature.
Posted by Vintage Muscle Men at 2:30 AM

Email ThisBlogThis!Share to TwitterShare to FacebookShare to Pinterest
Labels: Barrington