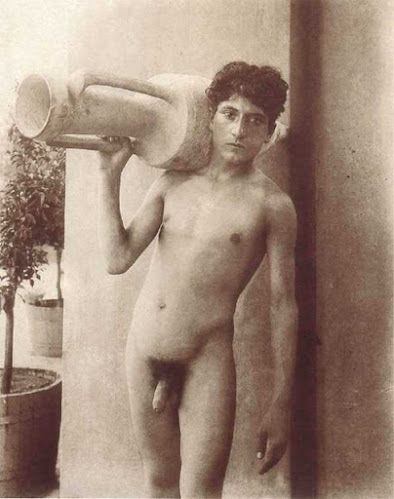 Wilhelm von Pluschow (1852-1930) was the lesser known older cousin of Wilhelm von Gloeden.  Von Pluschow moved to Italy in the 1870's, changed his first name to Guglielmo, and took up photography and love affairs with young, sometimes underage, men.  It's unclear if he seduced his models or conveniently used his lovers as models.  Probably both.  When von Gloeden moved to Italy and followed in his cousin's footsteps, his photographic career quickly eclipsed that of von Pluschow due to the latter's more formal and stilted style.   Von Pluschow was prosecuted at least three times by the Italian police for his dalliances with underage boys and was jailed for eight months.  He returned to Germany in 1908 to avoid a second jail term.  Although von Pluschow's photos of obviously underage boys are not classified as pornography and are freely available on reputable art websites, I do not knowingly post them and try to stick to models who at least appear to be of age.
Posted by Vintage Muscle Men at 2:30 AM