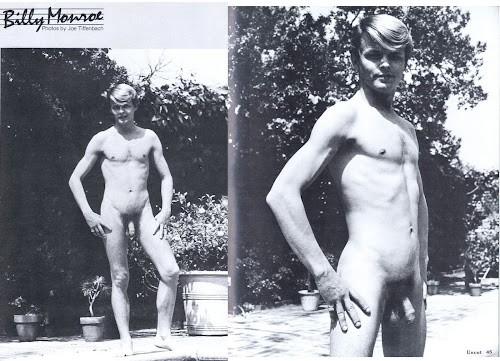 In his interview with the San Francisco Sentinel, Joe Tiffenbach described his first experience as a male nude photographer as some nudist shots he did for Ed Lange's magazines in 1969.  This composite shows the earliest examples of Joe's work I could find, two pictures of Billy Monroe from a publication called Uncut.  Billy's hairstyle makes me think these was made during the late 60's when dozens of gay oriented nudie magazines sprang up.  The uncut theme was significant for Joe beyond this commercial opportunity, though.  Over the next 20 years, Joe was active in promoting the appreciation of the uncircumcised male, publishing several articles as well as co-writing a book discouraging the practice.  From what I can tell from his remaining work, he went out of his way to photograph uncut men.
Editor's note:  More research produced a 1987 magazine of the same name with credits to Joe Tiffenbach.  This leaves me wondering if the two photos above were later than I thought, used long after they were made, or from an earlier version of Uncut.  Revivals in gay porn are not unheard of.
Posted by Vintage Muscle Men at 2:30 AM

Email ThisBlogThis!Share to TwitterShare to FacebookShare to Pinterest
Labels: Defunct Magazines, Joe Tiffenbach, Whatever happened to . . .