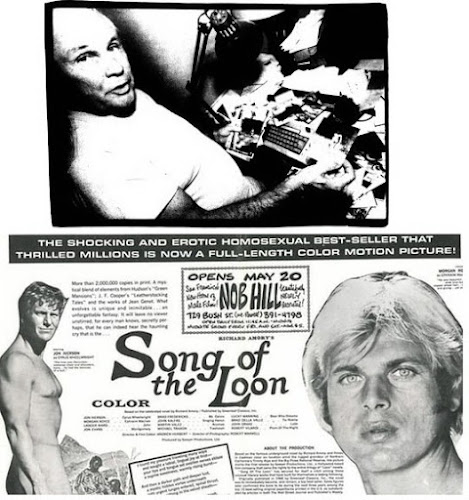 The top photo above is the only one I was able to find of Joe Tiffenbach later in his life.  It was attached to a 1986 San Francisco Sentinel article detailing his experience making Song of the Loon (1970), the first feature length gay themed softcore movie made  in the USA.  That movie became an artistic and financial nightmare for Mr. Tiffenbach.  (By many accounts, the gay movie business hasn't changed much since then.)  Looking at Joe in that picture with an array of photos makes me wonder what happened to them after his untimely death from a heart attack in 1993 at age 68.
Here's a link to the article in the UC Berkeley archives:
https://digitalassets.lib.berkeley.edu/sfbagals/Sentinal/1986_SFS_Vol14_No21_Oct_10.pdf
Scroll down to page 16.
Posted by Vintage Muscle Men at 2:30 AM

Email ThisBlogThis!Share to TwitterShare to FacebookShare to Pinterest
Labels: Ads, Joe Tiffenbach, Whatever happened to . . .