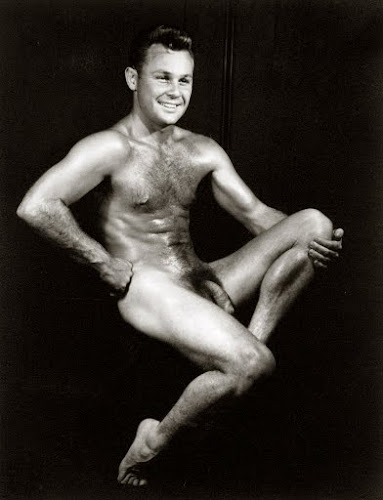 This Ralph Kelly photo of Joe Tiffenbach shows off his great smile.  We probably can date Joe's nude modeling career to the time between 1947 and 1956 because that was when Kelly was active, and Joe's pictures by Bruce of LA look younger.  If Joe began modeling while a college student at USC, he wouldn't have been the only college guy to do so.  His GI Bill benefits were barebones, and the extra money would have helped.  It is also possible that Joe continued to model after Charles Walter got him a job in the Fox mail room around 1950.  He looks past college age in this photo, imo.
Posted by Vintage Muscle Men at 2:30 AM

Email ThisBlogThis!Share to TwitterShare to FacebookShare to Pinterest
Labels: Joe Tiffenbach, Ralph Kelly, Whatever happened to . . .