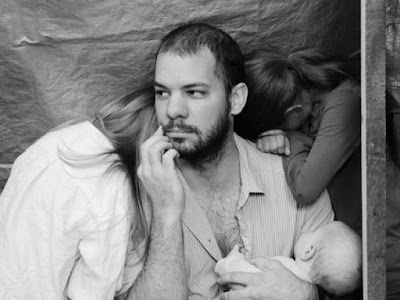 Dorothea Lange took this photo of a migrant father and his three children.  I've always been puzzled by this picture for two reasons.  First, his hair and beard were not anywhere near the usual 1930s style.  They seem to have the same amount of growth, indicating that he may have shaved his head and his beard at the same time.  Lice control measure?  Second, I initially thought the two girls were shy and hiding their faces, but Lange's notes indicated that they were asleep.  If so, it was an odd position.
Posted by Vintage Muscle Men at 2:30 AM

Email ThisBlogThis!Share to TwitterShare to FacebookShare to Pinterest
Labels: 1930's