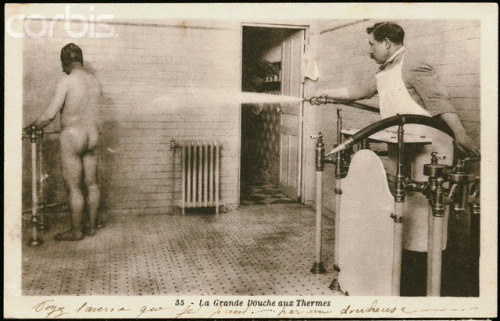 Hosing guys down with high pressure from across the rooms was used as both a spa treatment and rather dubious cure for mental illness in the late 19th and early 20th Centuries.  This is an example of a French spa, but I once worked in a psychiatric hospital built in 1910.  When they remodeled the basement, we found the tiled walls and plumbing fittings for a twin to this room.
Posted by Vintage Muscle Men at 2:30 AM

Email ThisBlogThis!Share to TwitterShare to FacebookShare to Pinterest
Labels: bath