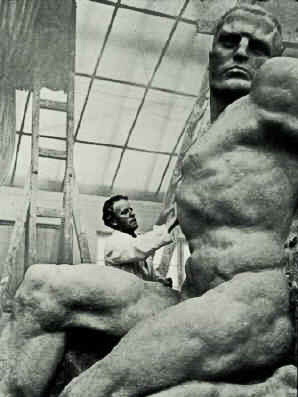 Josef Thorak (1889-1952) was an Austrian born sculptor who, along with Arno Breker, was one of the two preferred statuary artists of the Third Reich.  Hitler and his architect (also armaments minister) Albert Speer personally approved the use of Thorak's work at government facilities and public places.  Thorak apparently never joined the Nazi party, but he happily produced art for them, specializing in heroic statues of muscular nude men and horses.  He was jokingly called "Professor Thorax" because of his focus on the male torso.  Although cleared by a denazification court, much of his work was melted down in 1949, and he never regained his former place in German art.
Posted by Vintage Muscle Men at 2:30 AM