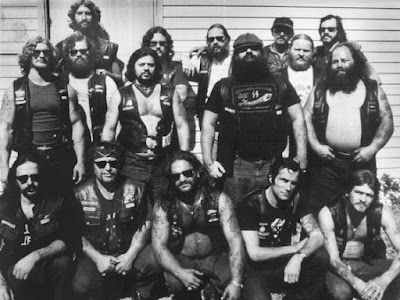 This is a 1977 photo of the Laval, Quebec chapter of Hell's Angels.  Five of them were killed in a what provincial officials described as an "all-out biker war" a few years later.  The camaraderie shown here apparently didn't extend to a rival branch that moved in on their territory.
Posted by Vintage Muscle Men at 2:30 AM

Email ThisBlogThis!Share to TwitterShare to FacebookShare to Pinterest
Labels: Motorcycle