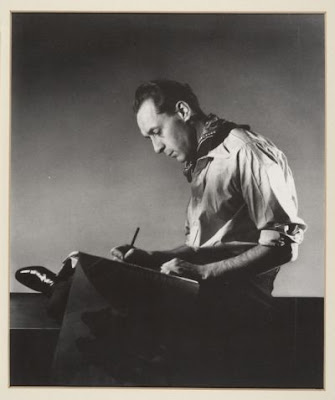 Pavel Tchelitchew (1898-1957) was the son of Russian aristocrats who fled the 1917 Revolution first to Berlin and then Paris.  He finally settled in New York with his American lover, writer Charles Henri Ford, in 1934 after having two successful art shows in that city in the early 30s.  Tchelitchew quickly moved into the top circles of the New York gay art world, becoming friends with Jared French, Paul Cadmus, and George Platt Lynes, who took the portrait photo above.  Best known for his surrealist work, we will (of course) be focusing on his male nudes for our Friday art.
Posted by Vintage Muscle Men at 2:30 AM