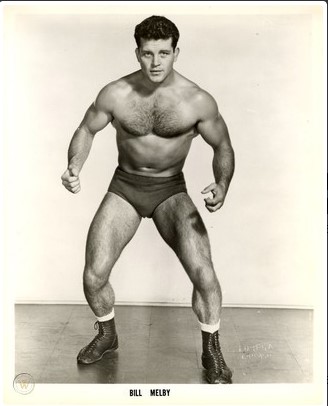 While researching this series, I found it interesting that Bill Melby has numerous mentions on both vintage bodybuilding and old time wrestling websites.  In fact some of the bodybuilding commentators lamented the fact that he switched his career to wrestling while still winning championships.  At least one was honest enough to say that Bill wasn't the only one and that the money was way better in wrestling.  He sure looks fine in this photo made shortly after the switch.
Posted by Vintage Muscle Men at 2:30 AM

Email ThisBlogThis!Share to TwitterShare to FacebookShare to Pinterest
Labels: Whatever happened to . . ., wrestling