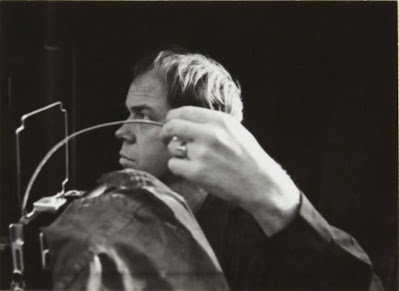 Minor White (1908-1976) was a photographer and educator who remained a closeted
gay man throughout his life, mostly due to fear of losing his teaching jobs.  His photography
remains highly influential to this day.  Some of his work reminds me of George Platt Lynes,
but I couldn't find any record of them having met, never mind collaborated.  White lived for over
two years in the Portland, Oregon YMCA, a place where he recruited several models.
This photo of him at work was taken by Phillip Hyde in 1949.
Posted by Vintage Muscle Men at 2:30 AM