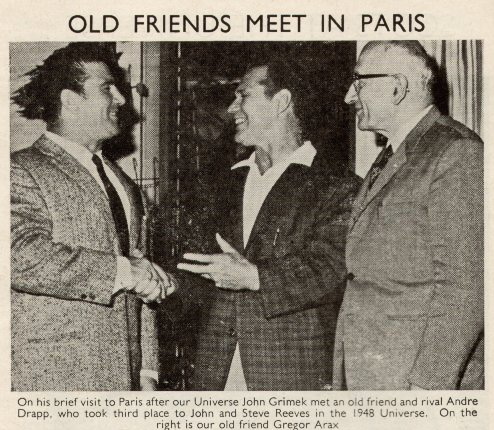 Andre Drapp (1920-2008) was a French bodybuilder and wrestler who was photographed by Gregor Arax over a period of about 15 years, from the late 40s to the mid 60s.  As a young man during the German occupation of France, he joined the Resistance and was described as a resolute fighter.  He won Mr. France in 1947 and came in third behind Steve Reeves and John Grimek in the 1948 Mr. Universe competition.  By the end of that decade he had embarked on a successful pro wrestling career.  After retiring from wrestling after a car accident around 1970, Mr. Drapp ran a successful gym in Nancy, France for 25 years.  Quite a handsome and accomplished man, he is shown above at left, along with John Grimek and Gregor Arax.  I think somebody else probably took this one.
Posted by Vintage Muscle Men at 2:30 AM