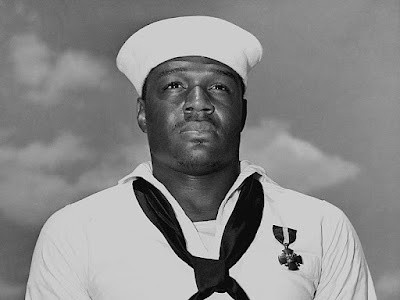 A few weeks after moving to Austin in 1969 to attend the U of Texas, I copped some tickets for a Junior Walker and the Allstars concert.  Not surprisingly, it was to be held in the Doris Miller Auditorium in the African-American section of town.  While waiting in line to get in the show, I was amazed to learn that Doris Miller was a man, not a woman, and a war hero at that.  The next day, I hit the library and learned all I could about the man who understandably went by "Dorie."  December 7 is still a somber day here in Hawaii, and I think it appropriate to remember this brave man today. 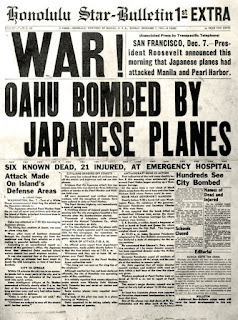 Mr. Miller was born to poor farmers near Waco, Texas in 1919.  To make money for his family, Dorie joined the Navy in 1939 as a Mess Attendant, one of the few jobs available to Black sailors.  Assigned to the U.S.S. West Virginia, he was collecting officers' laundry when the Japanese attacked Pearl Harbor.  After his assigned battle station was taken out by a torpedo, he went to an unmanned machine gun and started firing at the attacking planes.  Despite having no training on such a weapon, Dorie Miller stayed at the gun until the West Virginia sank, shooting down several Japanese planes in the meantime.  When the order to abandon ship was given, he personally carried several wounded sailors to safety, saving their lives. 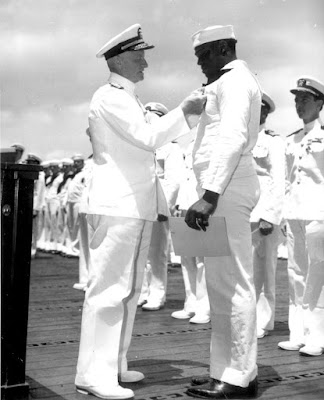 Dorie Miller was awarded the Navy Cross by the Secretary of the Navy who had heard of his heroism.  The medal was presented by a fellow Texan, Admiral Chester Nimitz.  When asked how he did it with no training, he replied,  "I'd seen them worked before, and once I learned how to point it, it was easy."  If Dorie had been white he probably would have won the Congressional Medal of Honor. 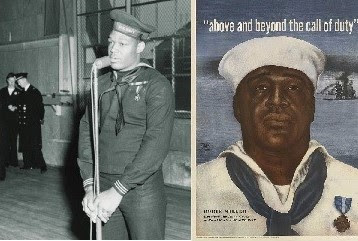 After winning the Navy Cross, they sent Dorie Miller on a bond selling and recruitment tour.
Above are a photo him speaking to a recruit class at the Great Lakes Naval Station
in Chicago and a poster made from the first photo in today's series. 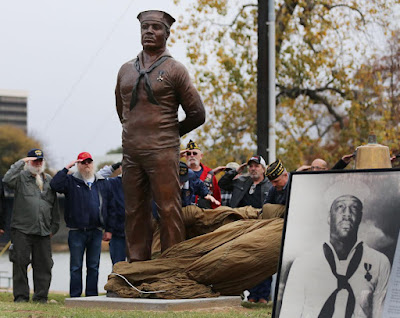 Dorie Miller asked to be returned to active duty and went back to the Pacific as a cook on the escort carrier U.S.S. Liscome Bay.  On November 24, 1943 Dorie's ship was torpedoed by a Japanese submarine, and he was lost along with two thirds of the 900 man crew.  Memorials of various types have been set up over the years, but the best is probably this statue in a park in Waco, Texas.
The photo is from the unveiling on December 7, 2017. 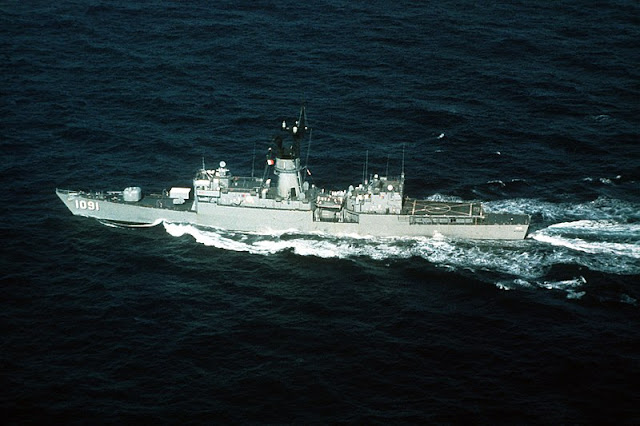 This is the U.S.S. Miller, a frigate launched in 1976 to honor Dorie Miller, but an even bigger memorial is in the Navy shipbuilding pipeline: 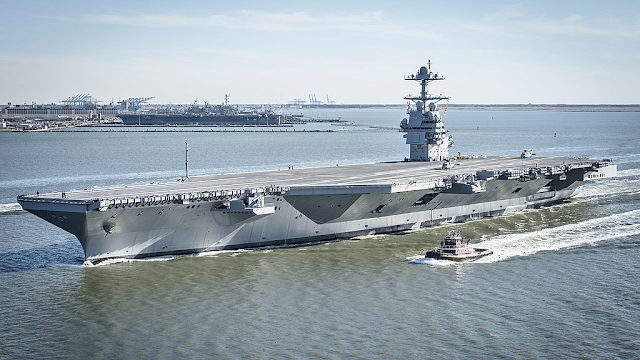 The keel will be laid next year for the U.S.S. Doris Miller, a Gerald Ford class major
fleet aircraft carrier.  Rest in Peace and Aloha , Dorie, and know that people still
remember your heroism, your example, and your sacrifice.
Posted by Vintage Muscle Men at 8:00 AM