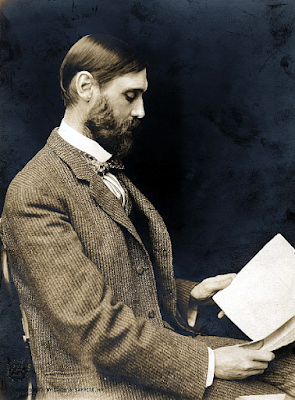 Kenyon Cox (1856-1919) was born into a family of Ohio intellectuals and took up art at an early age.  He studied for a year at the Pennsylvania Acacemy of Fine Arts under Thomas Eakins' tutelage before moving to Paris to extend his studies.  He eventually became one of the most influential figures in late 19th and early 20th C. American art, contributing to and teaching in the areas of murals, paintings, illustrations, and mosaics.  He also wrote poetry on the side.  Today we will look at half a dozen of his male nude drawings.  His son Allyn followed in his father's footsteps, and his work has appeared on this blog on several occasions.  This is Kenyon Cox's second series.
Posted by Vintage Muscle Men at 2:30 AM