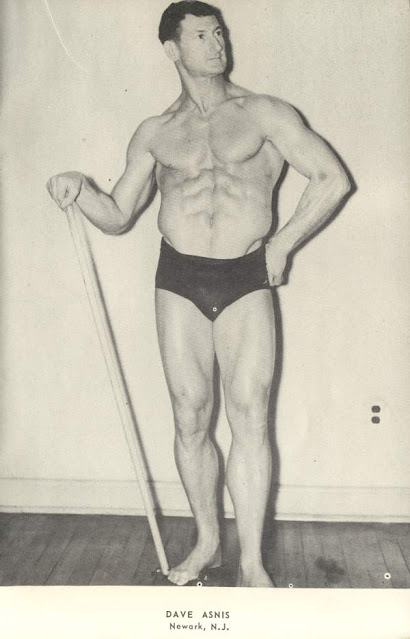 I found this undated photo of David Asnis on a website that chronicles mid-20th Century
bodybuilders.  From the looks of him, he could be in his 40s, which would date it to the 1950s.
I was able to find two  glowing accounts (1955 and 1968) of Mr. Asnis having appeared as a non-competitor at bodybuilding events where his abdominals were described as amazing for a man
his age.  I found business directory listings as late as the 1960s for an Asnis Gym that had
to be his in Irvington, New Jersey where he passed away in 1977 at age 65.
Posted by Vintage Muscle Men at 2:30 AM

Email ThisBlogThis!Share to TwitterShare to FacebookShare to Pinterest
Labels: david asnis, Whatever happened to . . .