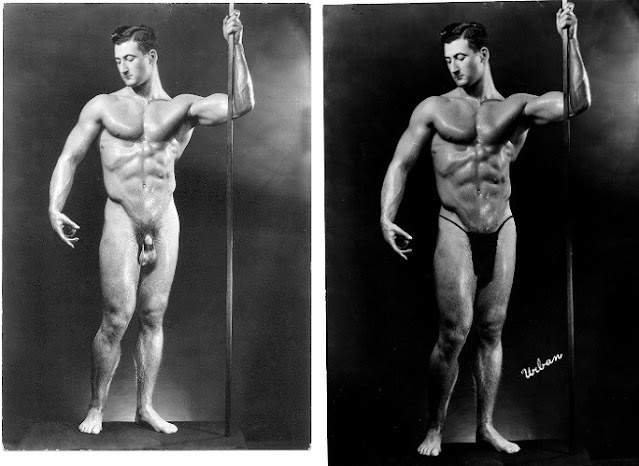 This is an example of the drawn in posing strap that many physique photographers used to try to avoid prosecution.  The buyers would rub off the posing strap and see the jewels.  In this case, there is an added element of interest.  The original, obviously at left, was made in 1940 by Al Urban, and the other one wasn't distributed until 1948.  It is worth noting that the legal environment in the USA turned notably worse in '48.  Mr. Urban mailed the covered version to a magazine publisher in Chicago that year with a letter admitting that the photo was made eight years earlier, but not mentioning the nude version.  My guess is that the recipient knew the "system" all along.  It is also of note that Al Urban thought David Asnis was still a viable sales option at that point in time.
Posted by Vintage Muscle Men at 2:30 AM

Email ThisBlogThis!Share to TwitterShare to FacebookShare to Pinterest
Labels: al urban, david asnis, Whatever happened to . . .