In prison again, for life as it turned out 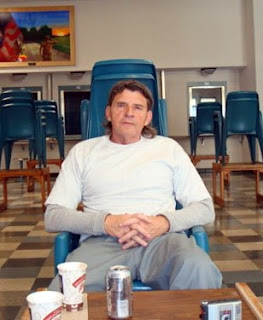 Paul Ferguson went back to prison in Missouri for raping a woman in 1989 with a term of 60 years.
The undated photo above was made during an interview for a piece on the Novarro murder.
Ferguson died in prison of natural causes in 2018 at age 70.  He continued to make excuses
and to shift the blame for the murder until the very end, even getting on a prison computer
in 2011 and claiming on the old IMDb forum that it was homicide and not a murder.
Posted by Vintage Muscle Men at 2:30 AM