San Quentin and beyond 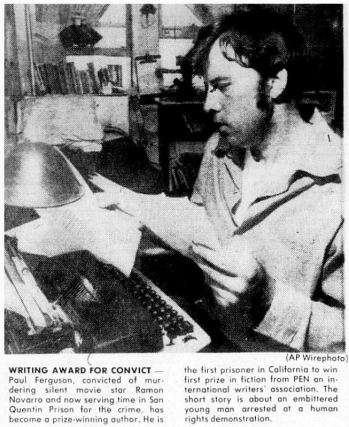 Paul Ferguson claimed to have taught himself to read and write in his chaotic childhood home,
and he did apparently have some success at writing, mainly while in prison when he had a lot of
time on his hands.  He won an award while in San Quentin (above) and managed to publish a few
short pieces afterward.  He and Tommy were paroled in 1976, far too soon one would think.  Both married, and both divorced.  Tommy was imprisoned two more times before fatally slashing his
own throat in a motel room in 2005.  Paul ran several businesses including a rodeo, a
steeplejack company, and a restaurant before landing back in prison himself.
Posted by Vintage Muscle Men at 2:30 AM