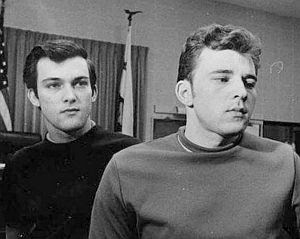 The Ferguson brothers looked pretty clean cut in court, as above, but they weren't too bright.  Each tried to blame the other, but managed to incriminate himself  in the process.  Their mother had Tommy convinced at one point to take the blame since as a juvenile, he could not be given a death sentence.  Tommy botched that strategy, however, and both were convicted and given life sentences.
Posted by Vintage Muscle Men at 2:30 AM