A Lifelong Friend Looks Back 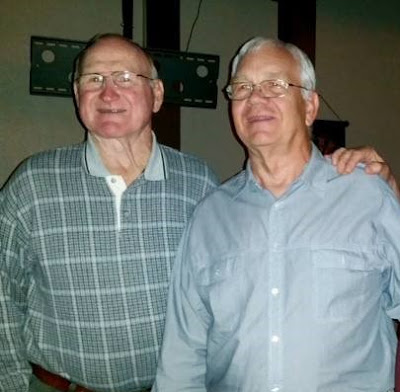 Bill Goss (right) grew up in the same San Antonio neighborhood with Tommy Nobis, played on the Thomas Jefferson High football team with him, graduated with him, and was drafted by the Falcons a few rounds after Tommy.  (Bill played college ball at Tulane.)  Bill never made it past rookie camp, but fell in love with an Atlanta girl and remained in the city.  Needless to say, they were lifelong friends.  Bill spent a whole lot of time with Tommy, and when asked to summarize what kind of man he was, he told a reporter,  "The amazing thing was his love of people.  If someone came to our table in a restaurant or approached him on the street, he always took the time to greet them and chat a bit.  If he saw a disabled person or child, he would approach them with a huge smile and strike up a conversation.  He would even give them a card with his personal phone number."  Sound familiar?
Posted by Vintage Muscle Men at 2:30 AM