Chuck Renslow of Kris Studio - an Artist and Cultural Hero 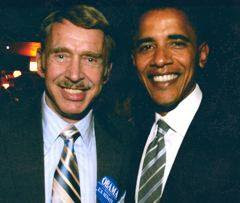 If you are a gay American and don't know who Chuck Renslow (1929-2017) was, you should.
Born and raised in Chicago, he came out as gay while still in high school, something brave even in a sophisticated big city.  He began photographing and publishing male nudes and semi-nudes in the 1950's under the Kris Studio brand, eventually publishing three magazines.  Renslow founded the Gold Coast Bar in Chicago as a safe place for leather men in 1962.  When arrested for selling nude male photos in 1964, he used his business assets and connections to fight back and won a precedent setting court victory in 1966.  In the Stonewall era, this remarkable man became an untiring and unflinching proponent of gay rights.  In the AIDS era, he founded charitable foundations to fight the epidemic and comfort the dying.  Realizing that political change would be necessary for full liberation, Chuck became active in Democratic Party politics, helping elect Barack Obama as U.S. Senator from Illinois.  I don't use the work "hero" very often, but Chuck Renslow was a hero.

I am combining our R and G-rated series today to do some side by side comparisons of Mr. Renslow's nude and semi-nude renditions of the same models.  I'll follow up later with some of my favorite nude duos photographed by this remarkable artist and human being.

All photos in today's two series are used with the kind permission of the copyright holder, Leather Archives and Museum of Chicago, Illinois, USA