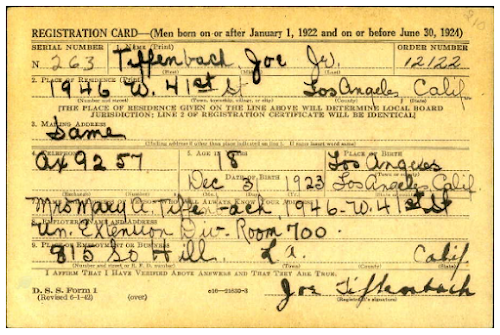 Joe turned 18 three weeks after the USA entered World War II, but he didn't register for the draft until June, 1942.  He was inducted in July of 1943, and he served in the U.S. Army Air Corps until February, 1946.  Like many other WWII soldiers, most of his records were destroyed in a fire in the 1970's.  Surviving records and accounts indicate that he was never sent overseas and never saw combat, but was hospitalized twice for illnesses, neither of which was serious enough to get him discharged.  I've examined hundreds of these draft cards and find it interesting that most of these young men, including Joe, listed their mothers and not their fathers as someone who would always know where to find them.  Joe was described on the reverse of this card as 5'7.5", 152.5 lbs with blue eyes, light complexion, and brown hair.  Someone got awfully precise with those measurements.  Nice to know, though.
Posted by Vintage Muscle Men at 2:30 AM