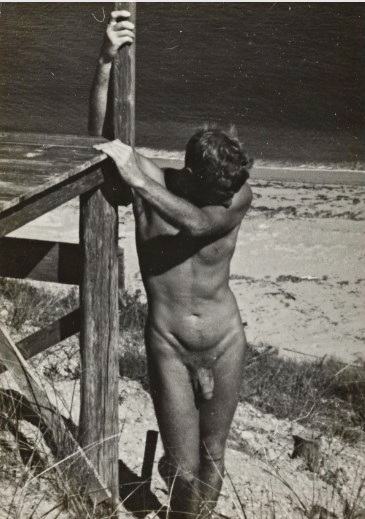 This is Jared French, a well known painter whose art I've featured here on the blog.  He was also a very good photographer; so good in fact that a number of his works are in the Smithsonian photo archive.  Due to his membership in the PaJaMa collective during his three way marriage with his wife Margaret Hoening and his male lover Paul Cadmus, attribution of his photographic work is somewhat confusing.  Most observers, however, feel that the great bulk of PaJaMa's photographic work was done by French with some help from Hoening and Cadmus.  So today we look at a mix of that work.  This photo of Jared French is attributed to PaJaMa, but he may well have taken it himself.
Posted by Vintage Muscle Men at 2:30 AM