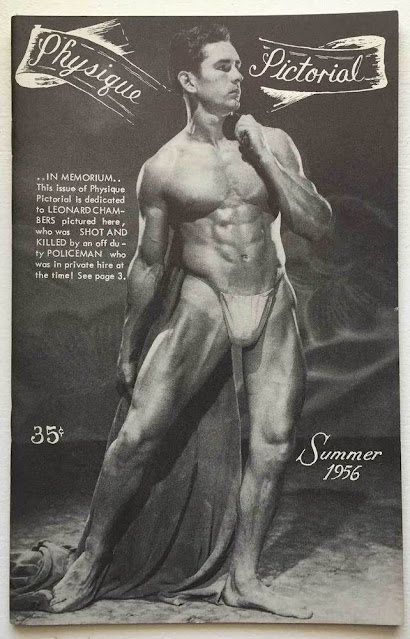 This Physique Pictorial cover was the lead-in for an editorial piece published by
Bob Mizer of AMG at a time when he knew the authorities were watching everything he did.
Some of you young folks today probably can't know how unimaginably brave that act was.
Rather than retell the story, I am going to post Bob Mizer's essay here unedited, and then move
on to an homage for a great model whose life was stolen.  Please read on:

This issue of Physique Pictorial is dedicated to LEONARD CHAMBERS pictured here, who was SHOT AND KILLED by an off duty POLICEMAN who was in private hire at the time! See page 3.

He continues on page 3 -- "WAS THE KILLING OF LEONARD CHAMBERS  BY TWO OFF-DUTY POLICEMEN "JUSTIFIABLE HOMICIDE"? Acting in the employment of a private bail bondsman, two Southern California policemen forced Leonard Chambers to get in their private car for allegedly failing to appear on some traffic charges. They testified that Leonard pulled a gun on them even though they had previously searched him and had him handcuffed. In desparate [sic] "self-defense" they shot him twice in the back of the head. Leonard of course didn't live to tell his side of the story. The coroner's jurors dutifully declared this murder "justifiable homicide."