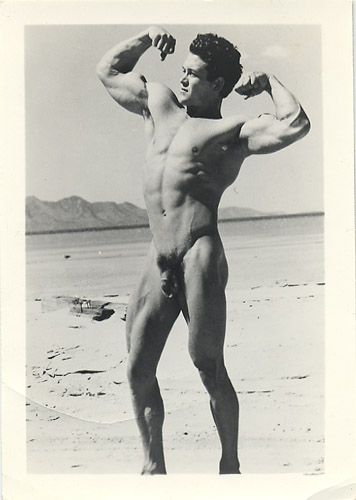 Bill Melby has appeared here on the blog as recently as a few weeks ago, and I've decided he needs his own series.  Today's posts are roughly in chronological order.  The early pictures are by Bruce of LA and show Bill during his successful days as a competitive bodybuilder.  Sadly, he seems to have removed his chest hair like a lot of his peers did, but it will show up later.  Mr. Melby grew up in the Salt Lake City area, having attended nearby Granite High School, and several of Bruce's photos (including this one) look like they were made at Great Salt Lake.  That leaves me wondering if Bruce made these during the memorable trip to Salt Lake City in which he photographed Mike Sill, Walt Needham, Dennis Christenson, and Reed Phippen.  Bill was already competing at the Mr. America level by that time, so he may not have entered the Mr. Utah competition that the others did.  The above is one of only two known frontal nude shots of this amazing man.
Posted by Vintage Muscle Men at 2:30 AM

Email ThisBlogThis!Share to TwitterShare to FacebookShare to Pinterest
Labels: beach, Bruce of LA