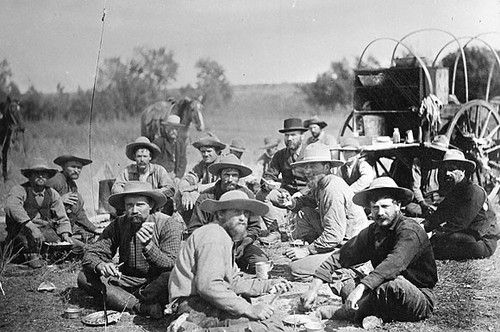 My Scottish-American family arrived in Texas in the 1850s, early enough to get a decent amount of free or almost free land.  By the late 1870s, the market in the eastern USA for cattle was such that major investments were made to expand the beef industry.  In 1878, a Scottish-American investor named Henry Campbell founded the Matador Ranch in Motley County, Texas.  Using family connections to the Campbell and MacLean clans, he attracted Scottish investors from the UK.  The Matador spread eventually grew to 1.5 million acres.  In an interesting parallel, the second and later sons of some Scottish investors who stood to inherit little emigrated to join the business in Texas.  Some second and later sons of Scottish-American settled Texas ranchers went to work for Matador.  This 1880s photo shows a mix of these men.  The fellow in the suit jacket with the narrow brimmed hat was a Scot immigrant, as were a few of the others.  Thanks to some diligent genealogical work on the part of several experts, I now know that I have DNA matches to at least three of these men.  According to my university ethnology professor,  "The Scottish culture is very portable.  It goes with them everywhere and never leaves them . . . no matter what."
Posted by Vintage Muscle Men at 2:30 AM