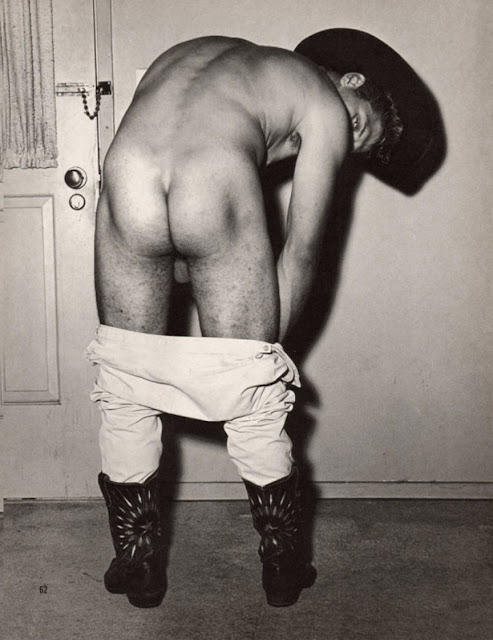 Those boots and the door identify this as the work of Bruce of LA,
but I don't have a clue as to who the model is.  We should be hearing from Albert shortly.
Edited to add:  Well, I may or may not have gotten this one all wrong.  It's Bob Jackson by AMG according to James IV's comment, but then again, it might be Bob Clark according to an email I got from my friend Boz.  The boots do look like Bruce's because I checked and they are in a series he did with David Gregory.  I suppose Bob Mizer at AMG could have the same style, but what are the chances?  Ah, mystery.  I have three or four more pics from the same session, but with no info.
Well, Boz sent me a different photo from the same session with the original photographer's watermark naming this guy as Bob Clark, so that part is determined.  Still researching who the photographer might have been.
Posted by Vintage Muscle Men at 2:30 AM

Email ThisBlogThis!Share to TwitterShare to FacebookShare to Pinterest
Labels: Cowboy