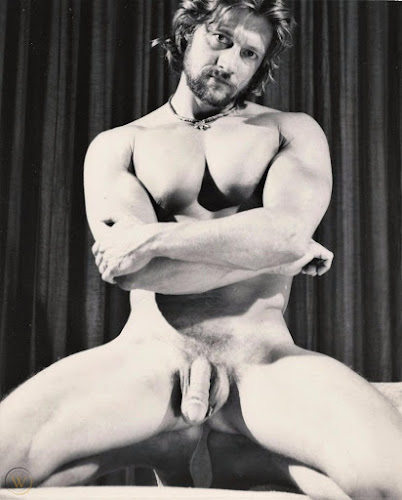 George Paul Erengis (1930-2010) had what appears to be a brief stint as a beefcake photographer in the late 1960's and early 70's.  Google says he is better known as a writer and publicist for the Hollywood movie and TV studios.  He wrote an article on the history of the studio system that is actually quoted in academic publications on the subject.  I found him credited as a writer for multiple seasons of that all-time TV classic, Divorce Court.  Anyway, I'd love to see more of his beefcake work and will profusely thank and credit anyone who sends me some.  I have just barely enough for a double feature.  We start with a full on nude of a guy who seems to have an interesting attitude.  He'd certainly get my interest.
Posted by Vintage Muscle Men at 2:30 AM