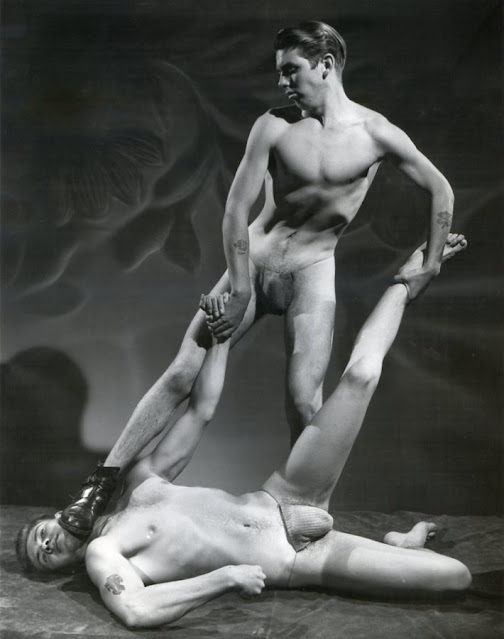 Before you jump on Bryan and me to tell us that this is an AMG photo, and not by
Denny Denfield, pause and consider this.  When Bryan first sent me this picture,
I noticed the trademark Bob Mizer projected background effect, so I told him about
it.  Bryan replied that he didn't know how that photo got into the wrong file folder,
and we had an email chuckle because we've both had that happen before.  I soon learned,
however, that there is a well documented history of Mr. Denfield having known and
collaborated with Bob Mizer of AMG, Bruce Bellas (aka Bruce of LA), and Alonzo
Hanagan (aka Lon of New York).  There are even photos in the AMG archives taken by
Denny of the background scenes at a Mizer photo shoot.  There are also lingering stories
out there of how Denny Denfield did published, but unattributed, work for some
of the great physique studios.  So this might well be a Denfield after all.
Posted by Vintage Muscle Men at 2:30 AM