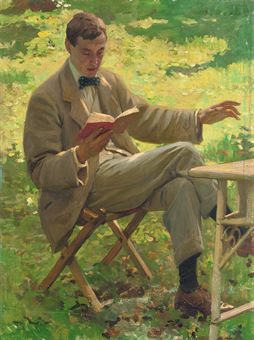 Sir Alfred Munnings (1878-1959) was one of the pre-eminent British artists of his age.  Best known for his excellent depiction of horses, he became wealthy when he gained commissions from the Canadian War Memorial after World War I.  He was president of the Royal Academy of Arts from 1944 to his death.  We start with this portrait of Sir Alfred by his friend Harold Knight.
Posted by Vintage Muscle Men at 2:30 AM