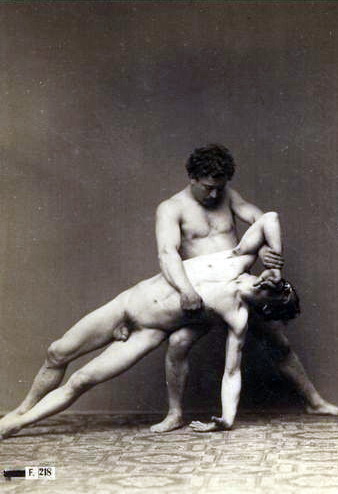 Hermann Heid was a 19th C. Austrian photographer who worked for a time in Paris and had
a number of his male and female nude photographic studies published in a bound album along
with works by Igout.  A problem of sorts has arisen over which photographer produced which
photos because not only did the publisher not differentiate or credit either of the two, but they
used some of the same models, studio settings, and style.  Oh, well.  Today we look at some
works supposedly by Heid in which he shows his penchant for photographing models in
various horizontal or near  horizontal positions.  We start with this duo featuring a
personal favorite burly model with curly hair.
Posted by Vintage Muscle Men at 2:30 AM