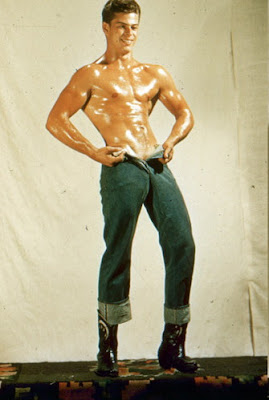 Zaro Rossi is well documented to have posed for gay artist and entrepreneur George Quaintance.  In fact there is a lingering story that Zaro and some of Quaintance's other models actually broke into Quaintance's Phoenix area house, Rancho Siesta, after his death to get some photos of themselves at a wild party which were incriminating under the laws of the time.  When I first saw this photo of Rossi, I was skeptical it was Quaintance's  at first.  Then I noticed the trademark Indian blanket he is standing on, and then a few days later, I took another look at the art piece which follows in today's series.
Posted by Vintage Muscle Men at 2:30 AM