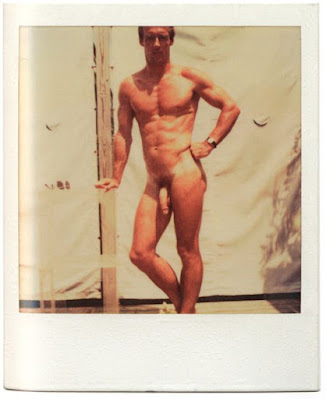 Those of us of a certain age remember the period of 1975-1983 as an era when gay men began to culturally assert themselves and become an open part of the American social scene.  Free love,
discos, trips to the beach, Gay Liberation meetings, and so much more were part of our lives, and
Tom Bianchi recorded some of this in a series of Polaroid photos he took on Fire Island.  And then AIDS happened.  Today we go back to a carefree time on the verge of a catastrophe that left us
stronger, but with such awful losses . . . too many in my life for me to even list here.
Posted by Vintage Muscle Men at 2:30 AM